Anglers in Malaysia can be considered a very lucky group of individuals with many different styles of fishing available to us, may it be offshore jigging for bottom dwellers or the humble pay-pond ‘pacak’ for patins. No matter the case, I believe that deep down in our hearts, there is one fish that reigns supreme over the myriad of other fish available to us- the giant snakehead. Explosive takes, drag peeling dashes, and sheer brute force to keep fighting has definitely made the giant snakehead one of the most sought after game fish in Malaysia. However, unfortunately for us anglers, giant snakeheads are just as smart as they are ferocious, making them a very hard species to tempt especially in our highly pressured waters. Famous spots for giant snakehead hunting in dams like Temenggor or urban lakes like TanChong and Empat Tin have declined, with the fish getting both few and warier over the years, leaving only memories of the good old days for us to dream and remember. That begets the question, is this really the end of good giant snakehead fishing for us as Malaysian anglers? 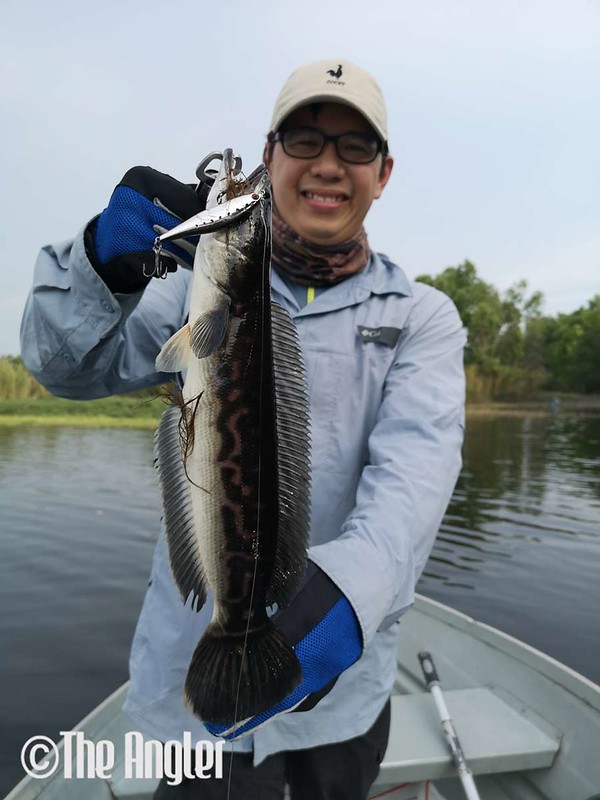 A giant snakehead. They can grow much larger than this.

When exploring any spot for the first time, it is good to first examine the presence of baitfish or bottom feeders like tilapias or African walking catfish. Being the apex predators that they are, a spot without a sustainable food source for giant snakeheads would most likely not be productive as the lake cannot support a large population of snakeheads. Lakes where people from temples release fish into can be especially productive, as the tomans are provided with an endless food source. This usually leads to very big and fat tomans that cannot be found in other lakes. Such an abundant and unnatural food source also leads to exponential growth of the toman population in the lake, making it a heaven for us anglers. Besides that, knowing the food source allows us to match the hatch with the lures we use, for example using minnows or pencils to mimic baitfish in lakes with plentiful baitfish rather than crankbaits to match their slim profile can prove key in getting strikes, especially if they are keyed in on a certain profile. In tandem with this, following the groups of baitfish and casting around them is generally the best way to find tomans that are actively feeding. In my own personal experience, I have seen toman go into feeding frenzies like peacock bass as they chase and hammer baitfish, meaning that placing the lure amidst the baitfish would almost guarantee a strike. 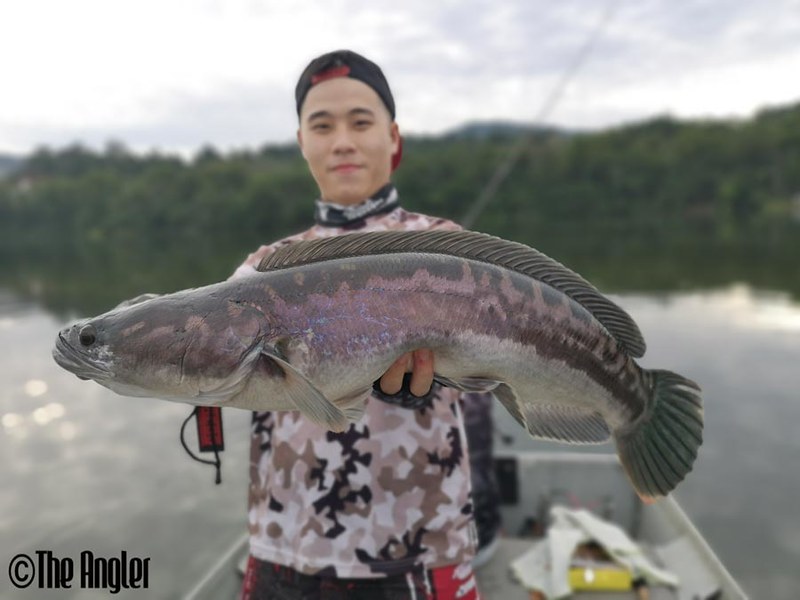 Another giant snakehead caught off the lake.

Exploring new spots, especially large bodies of water can be very challenging. Not knowing where to focus efforts on can account for many missed opportunities and wasted time. Since tomans are a very structure-oriented fish, any type of cover, be it hard cover like sunken logs or soft cover like water hyacinth will definitely be key spots to target as the tomans tend to cling close to it. In spots where a certain type of cover dominates most of the lake, aiming for areas with slight differences or combinations of structures for example a sunken log in a hyacinth covered lake can usually prove productive. Besides that, any water inlets like rivers or even drains usually draws baitfish to it due to its oxygenated water, which in turns draw in predators like the toman, making it another prime area to target. In my past experiences when covering such higher potential areas, it pays off to slow down and cover the area thoroughly, alternating between sinking and topwater lures, as the fish might be holding out at a rather deep depth and not inclined to come all the way up to the surface for a meal, especially in lakes with bountiful food sources available. Letting the lure sink and go down to them rather than having the fish come to it may work better in tempting the lazy lunkers into actually striking the lure. 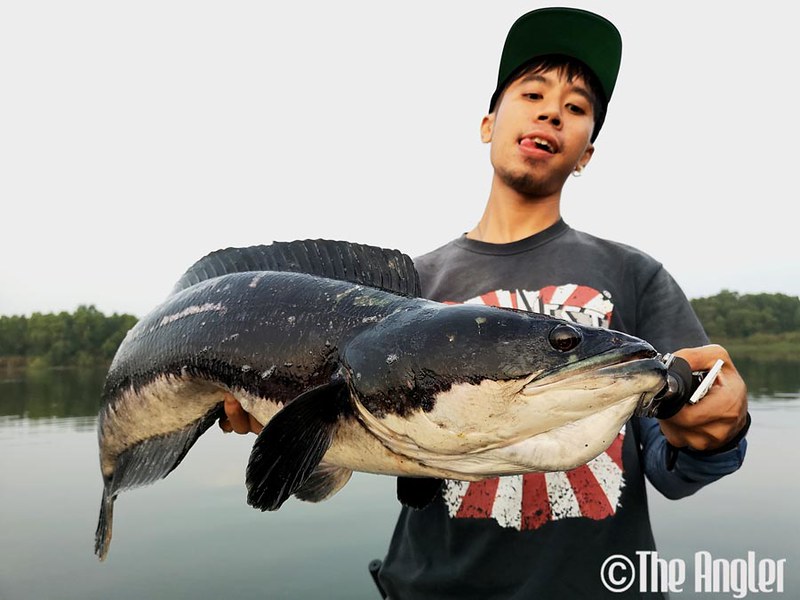 A key factor often over looked when exploring spots is the timing. While the rule of the thumb is that fish are actively feeding during the morning and evening, fish in certain spots maybe be different, where they are only actively feeding during that small window of dusk and dawn. That is why it is always important to be at the new spot just before the break of dawn to unload the boat and setup the gears before heading out. Another point to note is that as the day gets hotter, especially the late morning around 9-10am, I have noticed that tomans tend to rise to the surface for air more often which usually happens further out from the banks and structure, closer to the deeper ends of the lake. This is where spotting their tell-tale rises come into play, switching from blind-casting at structure to sight-casting can prove more effective if rises can be spotted. Rather than having the fish actively come to the lure, sight-casting puts the lure right in the fish’s face, prompting a reaction strike even if it is way past their feeding time. 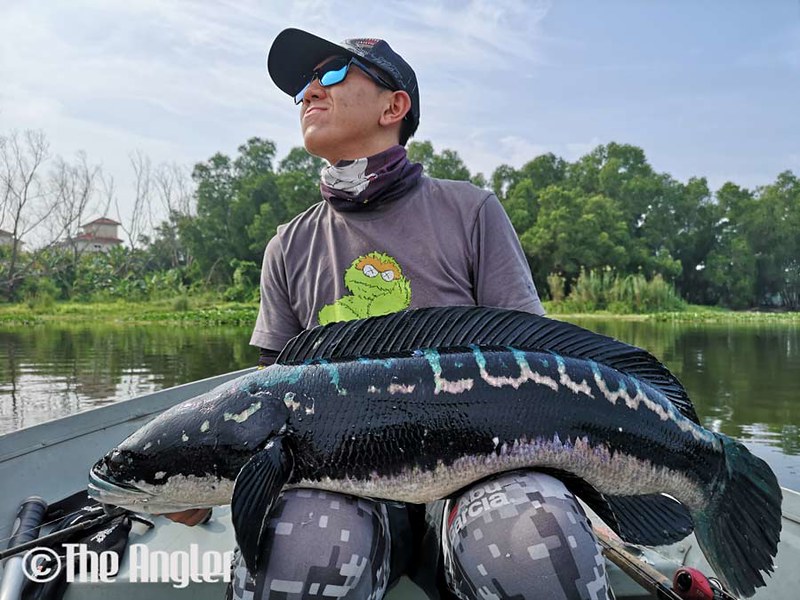 When targeting well fed tomans, sometimes appealing to their reaction rather than hunger can be a more suitable approach. In a recent spot which I found, the tomans were very well fed by a constant source of keli (catfish) being released by a temple nearby. Although they were interested in the pencils and minnows we threw at them to mimic baitfish, few of them hit our lures. Many only followed the lures rather than aggressively attacking it, probably due to the fact that they were not actually hungry, rather only following out of curiosity or aggression. By switching to noisier and flashier lures like buzzbaits and spinnerbaits, the tomans were drawn to it out of their aggression rather than hunger, and much more strikes were received compared to more subtle lures. This makes buzzbaits and spinnerbaits very effective search baits, as they are able to cover vast amounts of water in a short amount of time while triggering strikes which is key in patterning where and what the tomans are attracted to. This holds true when approaching toman fry balls too, getting their guardians to strike out of aggression and the need to protect their young rather than hunger. The guardians of fry ball in new spots are usually very aggressive as they have not faced high fishing pressure before, and slow cranking crankbaits through the fry ball can easily trigger an aggressive take within the first few cast. However, it is still important not to spook the fry ball’s guardians as they might choose flight over fight when placed in a difficult situation. Parking the boat further from the fries and casting ahead of them before slowly retrieving the lure into the fry ball has proved the most effective as the parents are less spooked and therefore more aggressive.

Note: Always release giant snakeheads back to where they were landed so that they can continue to protect their young from other predators.

To conclude, toman havens still do exist in Malaysia. I must admit it is difficult to take the first steps to explore a new spot, especially with no prior knowledge of the terrain. However, mind-blowing topwater explosions and sheer brute force of the toman can still be experienced amidst the wild and untouched lakes, but only if you take the first step needed to find them. So, go and explore, step out of the usual comfort zones, you never know what might be waiting for you in the next lake you explore! 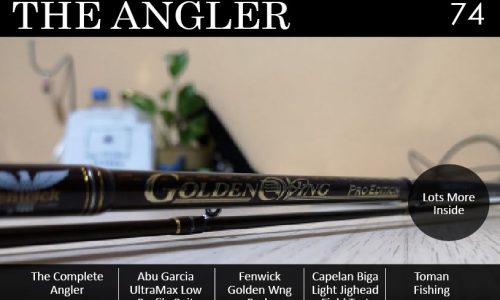