Malaysians have a love-hate relationship with Peacock Bass. On one hand they are invading our waters, competing with and wiping out our local fish species. On the other hand, they sustain a sportfishing industry that puts food on the table for boat rental services as well as fishing guides. Whatever your stance is regarding this invasive species, one can’t deny they are one of the most enjoyable sportfish to catch on rod and line. They seem to be popping up everywhere, with one of their strongholds being the state of Perak. Most anglers have heard of or been to Air Kuning, but Lembah Jernih has just recently become the hotspot for those seeking their weekly dose of PB.

[  I saw a rise and cast my soft plastic worm on a Carolina rig at it. After only hopping the worm once I felt an aggressive bite and immediately set the hook. Instead of a bass, I had a spinning, thrashing snakehead at the end of my line….   ] 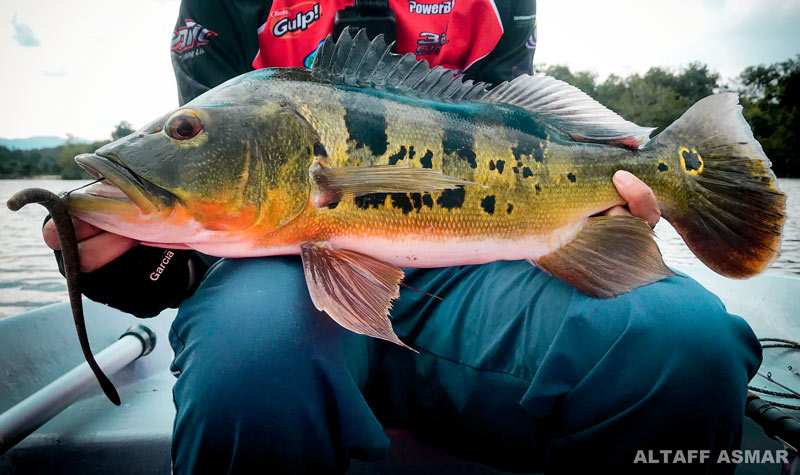 One of the fishes; the beautiful peacock bass sparked much controversy in the Malaysian fishing scene.

Me and Hazique headed out at around 6am from Selangor and arrived at Lembah Jernih in Batu Gajah, Perak at around 8:30am. Upon arrival we were informed that we can check into our chalet later and that we can start fishing immediately. Without wasting any time, we unloaded our fishing gear and started fishing form the jetty. After about an hour, I caught a tiny bass on a Carolina rig. Then we decided it was best to continue aboard a boat. After loading up, our first stop was a little cove that connects to a small river. It was a quiet little cove, shaded from the wind by trees and had weed patches dotted around in the water.

It wasn’t long until we noticed a few fish rising, though unsure whether it was a snakehead or some bass. I saw a rise and cast my soft plastic worm on a Carolina rig at it. After only hopping the worm once I felt an aggressive bite and immediately set the hook. Instead of a bass, I had a spinning, thrashing snakehead at the end of my line. At first I thought it was just a Common Snakehead/Haruan. Upon closer inspection I can see that it was a Forest Snakehead/Bujuk. I had to get this fish in the boat, not only was it my first Forest Snakehead, it was my first snakehead hooked using a soft plastic worm. 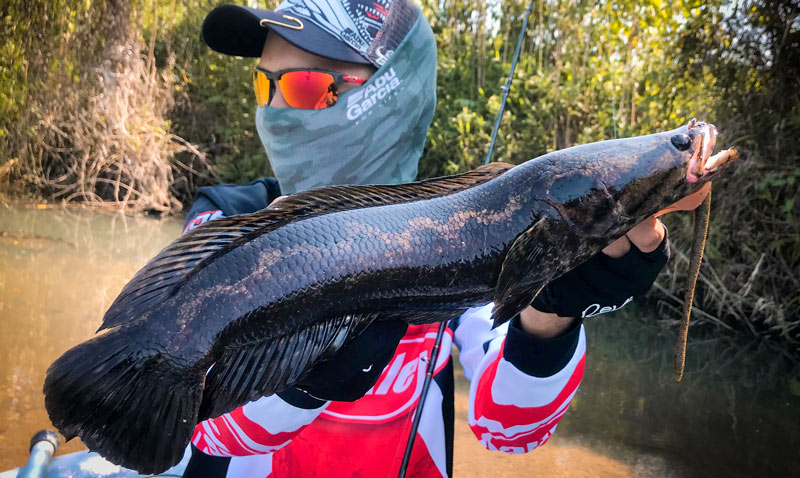 After releasing the snakehead, we proceeded to comb through the main lake but no luck. As a storm was about to roll in, we entered a second lake via a tiny channel cut into the bank. Upon entering we spotted this single rock in the middle of the lake. In my head it had a neon sign above it saying “BIG BASS HERE” as we slowly crept towards the rock.

We dropped anchor a few metres from the rock and I made a cast right against the rock. I hopped my worm once and I felt as if my rig got stuck between two massive boulders. I flicked my rod to try and free my rig. That was when I realised that the boulder started swimming to the right, my heart sank and gave a sweeping hookset. It felt like I had an anchor that was doing headshakes at the end of my line. After a few tense seconds, the fish rears its ugly face and it was the biggest Peacock Bass I have ever seen in my life. After diving under the boat and jumping a few time, the behemoth of a bass was finally in the boat. 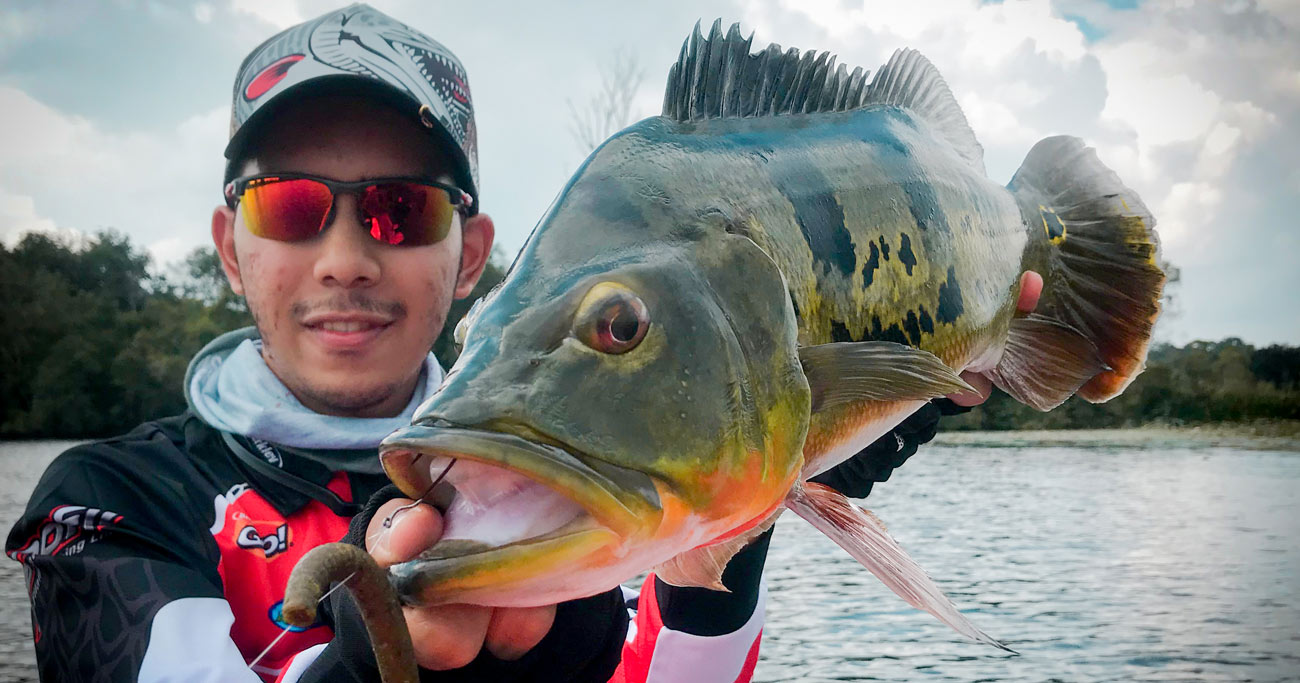 After measuring and a quick photoshoot, the fish as released back into the depths to grow even more monstrous. By then, the clouds above us ripped and it started to rain, though not that heavily. After not getting bites while it was raining, we found a school of good-sized bass in the calm waters after the storm. We got off the water as soon as the sun set and called it a day. I drifted off, dreaming of my personal best bass.

I awoke to the sound of Hazique getting ready to fish. I decided to sleep in a bit and let him fish around the jetty. At around 10am, Hazique called me and said the fish have started biting, that’s all the wake up call I need. We loaded the boat and did a few rounds at the first lake where I caught another nice bass on the Berkley Powerbait Maxscent Hit Worm. Hazique had a close call with a Giant Snakehead but the fish didn’t seem to want to commit. After a few hours of no bites, we once again went to the second lake to find some bigger fish.

The day was blazing hot, unlike the overcast day before. We headed for the rock which we’ve named Donkey Rock because of the donkey sized bass caught off it, but no luck today. We found a shallow flat with submerged weeds where we parked for about half an hour. In the corner of my eye I saw a fish busting bait at the surface. I cast my worm, this time on a Texas rig, and to my surprise, the fish bolted towards my worm and inhaled it. This fish wasn’t to big so it was in the boat within no time. 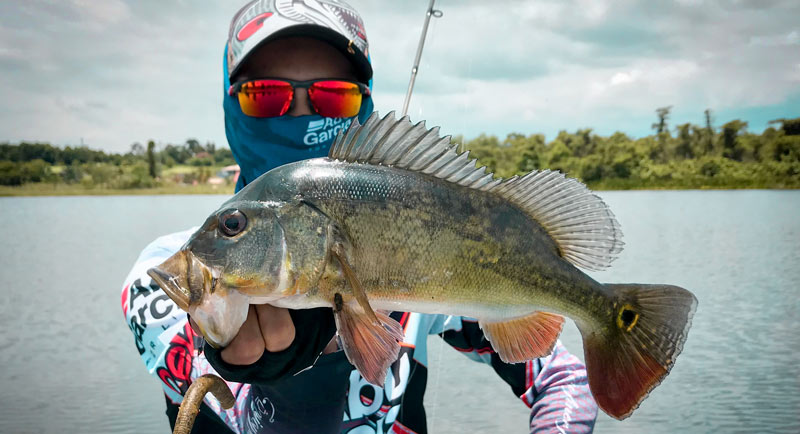 After releasing the fish, we had lunch in the middle of the lake. A few more fishless hours later and we decided to make one last stop at Donkey Rock before calling it a day. This time the clouds have started to roll in and the wind was picking up, perfect conditions. Within a few casts, Hazique was able to breathe a sigh of relief and he caught himself a decent fish. We were both happy and laughing when Hazique cast at the rock from a different angle. His worm sank all the way to the bottom, and it seemed like it got stuck on a boulder… or so we thought. It was a fish and Hazique gave a strong hookset, waking the fish from its passive daze. It swam around and under the boat a few time before I could get a good grip on its jaw. Lifting the fish into the boat, I realised that it was bigger than the one I caught yesterday. 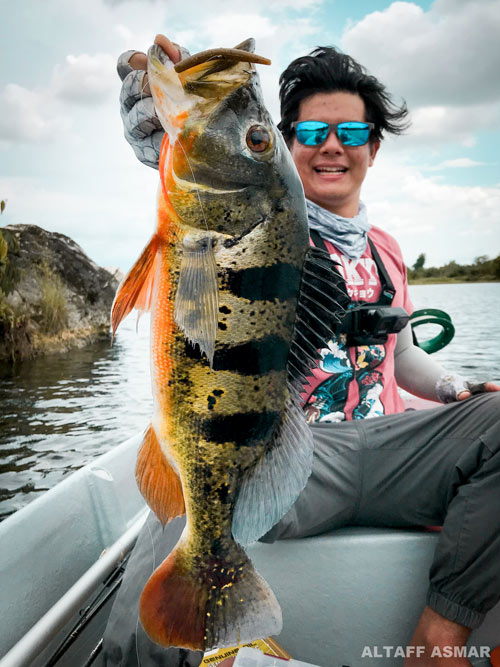 Hazique’s beast of a bass, another 50+cm specimen.

Victory screams were made, photos were taken, high fives were exchanged, and the fish was released back to its dark lair. We headed back to the jetty laughing and enjoying the feeling of a successful trip. Lembah Jernih is not a big place, and we don’t know how long this phase, where the fish aren’t that finicky, will last. Special thanks to the super friendly and helpful staff of Lembah Jernih. If you are reading this, head on over to Lembah Jernih, the fishing won’t be this good for long. Alright! That’s all from me in this issue, catch you guys in the next one. Tight lines!