In the months spent attending online classes, I daydreamed along with my good friends Altaff and Hazique. We planned for a three-day adventure to start our holidays on a good note and what better place for an adventure than Perak. Our holidays finally came and to say we were excited would be an understatement.

Our first destination was Air Ganda to target Giant Snakeheads. The midnight drive was smooth and we were welcomed by thick fog in the town of Gerik. After a quick breakfast and setting up our gears we were on the water at 8 a.m with our boatman, Shahril. We cruised slowly through murky water and debris caused by heavy rain over the past few days in search of cleaner water. Before the trip, Shahril found 20 groups of Giant Snakehead fry but they were nowhere to be found that morning. You have to play with the cards you’re given so we started by targeting lone Giant Snakeheads with topwater lures to no avail.

Where have the giant snakeheads gone?

Past trips to Air Ganda proved that topwater lures and crankbaits were the way to go but fish behavior changes constantly. With topwater lures out of the picture, we pulled out crankbaits and that’s when our luck changed. Sometimes you have to listen to what the fish tell you. With the sun finally appearing behind thick clouds at 10 a.m Altaff cast out his Rapala DT20 chrome crankbait at a rise which resulted in a big hit. As the Giant Snakehead dashed around his Revo Beast rod and reel setup was loaded. Meanwhile, Hazique cranked his red Duo Realis crankbait through a group of Giant Snakehead fry. As the crankbait neared the boat a sudden tug came… double hook up! 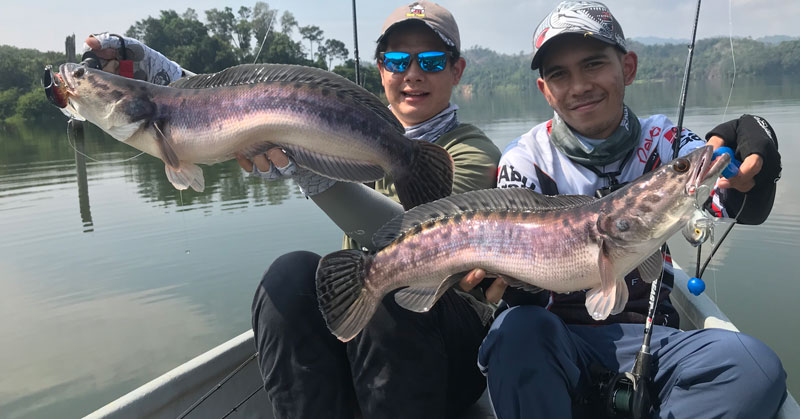 The Giant Snakehead stripped some line off his Revo Beast but after adjusting his drag he was back in control. Both Giant Snakeheads were landed for a photoshoot and released. High fives were in the air. Hazique’s Giant Snakehead was a loner and not a parent guarding a fry ball we spotted. The snakehead was probably feeding on the red fry ball and a red crankbait passing by proved irresistible. We fished crankbaits for another two hours with only a few missed hits.

At noon we had a break as strong winds made spotting rising snakeheads difficult. The fishing continued in the evening but we had no luck as both lone Giant Snakeheads and parents guarding fry balls ignored our lures. Crankbaits, topwaters, spinnerbaits, and buzz baits were delivered in front of any Giant Snakehead we spotted but all failed. Around 5 p.m dark clouds and slow winds began rolling in as we fished buzz baits around grassy areas. 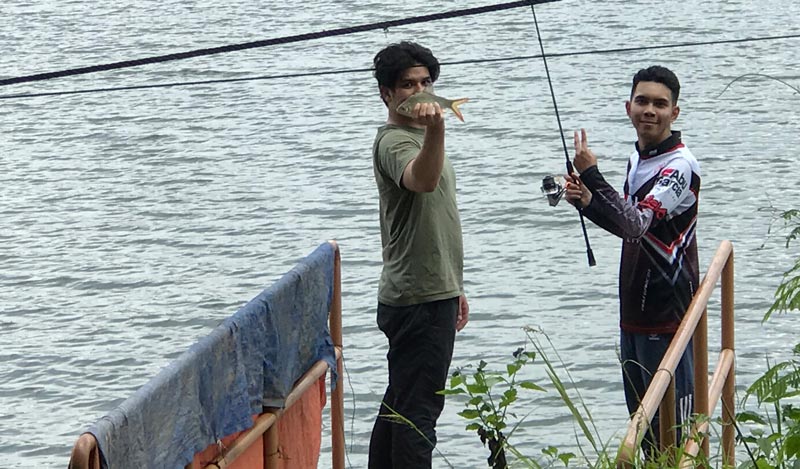 A lovely tinfoil barb caught while taking a break at noon.

From my experience, I found that light rain before or after a downpour makes for a good situation to fish topwater lures when targeting Giant Snakeheads (sometimes). On this particular day, things went as planned. A nice Giant Snakehead gulped my pink buzz bait as it passed along edges of grass. I landed the fish just in time before a downpour began thanks to a locked drag on my Revo S baitcasting reel. The fish was released after a photo and we continued casting in the rain. The grass edges were the right place to be as we had a few more blow-ups but the snakeheads missed. By 6 p.m the rain stopped and Altaff scored a small Giant Snakehead on his chrome crankbait for us to call it a day. 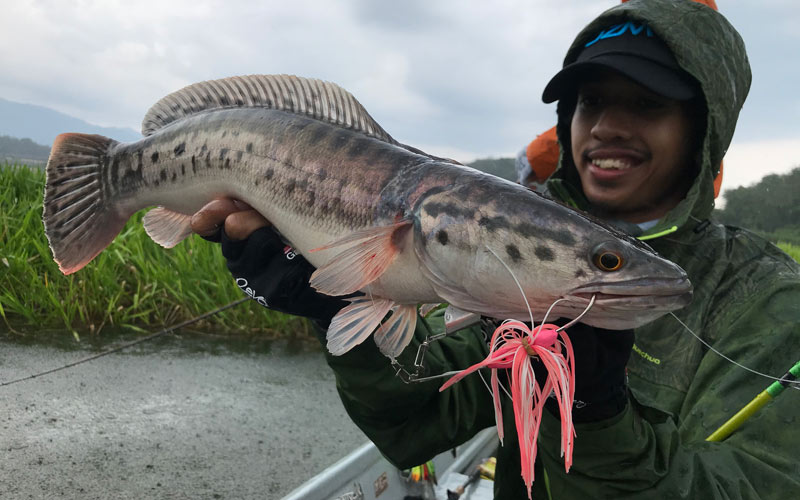 My giant snakehead caught before it started to pour.

For Day 2 we decided to visit Air Kuning’s Monster Lake. As the name goes, this small lake is known for monster Peacock Bass by Malaysian standards. The bass here are big and specimens of 40-50+ cm are common but there’s a catch. This lake is packed with aquatic vegetation such as Coontail and Hydrilla making fishing tough. To cut things short we struggled the whole day as water levels dropped and the thick weeds made it hard to get a bite. Combined with Peacock Bass being very passive on that day we admitted defeat.

Just across Monster Lake is Air Kuning’s main lake. It is probably the biggest compared to other lakes in Air Kuning and it is reputed to be one of Malaysia’s legendary Peacock Bass fishing grounds. It was the last day of our adventure and our last shot at redemption after failure on Day 2. We fished a weed edge around an island to start the morning and sure enough, the fish were around. Hazique landed a juvenile Giant Snakehead on jerk bait while Altaff caught a nice 40cm Peacock Bass. He fished a carolina rigged soft plastic through hydrilla and found a nest which resulted in his nice fish. Over the next hour, we found a few more nests but the Peacocks were reluctant to bite. Altaff hooked up with a solid specimen but it dashed deep into hydrilla and the hook popped out.  Nests were located on edges of thick weeds which made it a challenge to get a bite and pull fish out. 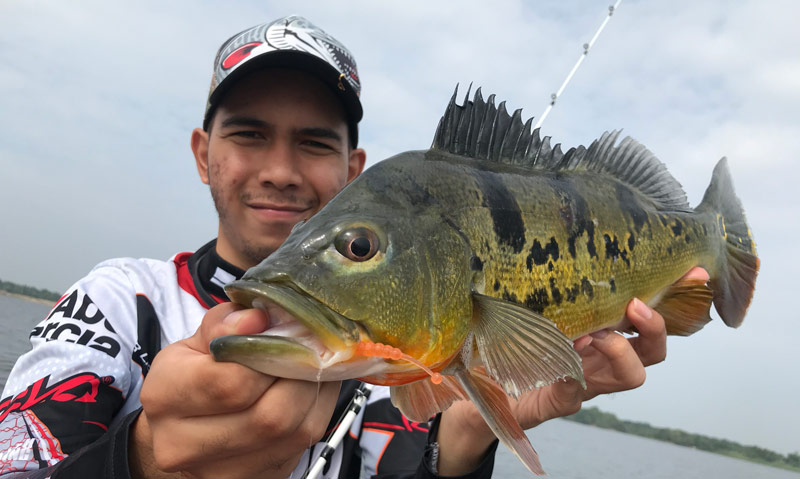 Altaff and his 40cm peacock bass aight at a weed edge.

A few groups of Giant Snakehead fry balls were around but it proved to be a waste of time as we did not get any response from the parent snakeheads. At noon we spotted a lot of big Peacock Bass rising. Somehow just like what we experienced at Monster Lake, they showed zero interest in any artificial baits we presented. I was lucky to hook one bass on a carolina rigged paddle tail soft plastic but it managed to throw the hook. By 2 p.m we changed our game plan and targeted Giant Snakeheads at a small area known as “Mini Kenyir”. The area was lined with vegetation and a few lone Giant Snakeheads rose along edges of water hyacinths. Hazique tried a crankbait and received one hit before he switched to a spinnerbait. His hard work of blind casting along weed edges paid off when a Giant Snakehead took his firetiger spinnerbait on the drop. The fish gave a hard fight but it was no match for Hazique’s Revo Beast reel. With Hazique on the board, I was the only angler left with no luck for the day. We ventured back to other areas of the lake and committed to soft plastic worms for Peacock Bass but they were not interested. 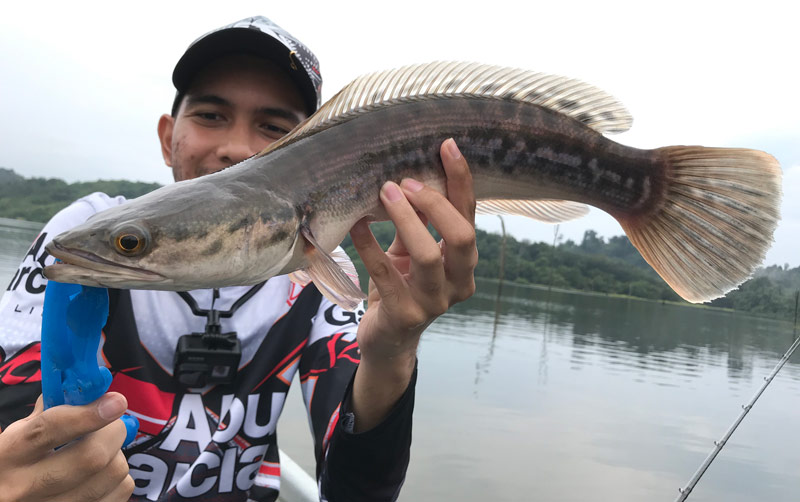 Altaff and a juvenile snakehead.

By late evening we decided once again to chase Giant Snakeheads. As conditions were getting darker, more Giant Snakeheads rose around us. We cast buzz baits around to call out and intimidate them. The water surface erupted as a solid Giant Snakehead hit Hazique’s buzz bait but his loose drag was a mistake. The fish turned and swam away as the buzz bait hook did not penetrate. Despite the disappointment, we were pumped and continued to cause a lot of disturbance with buzz baits. Once again a blow-up occurred next to water hyacinths but the fish missed Hazique’s buzz bait. He sure knows how to call out those snakeheads. I tried a bright green buzz bait as the sun began to disappear under the horizon. One Giant Snakehead rose next to water hyacinths and I placed my buzz bait right next to it for another surface explosion. Fish on! My 10-20lb Salty Nova Colours casting rod fought the fish with no trouble. We were ecstatic to have the fish in the boat. What a perfect ending for the trip. 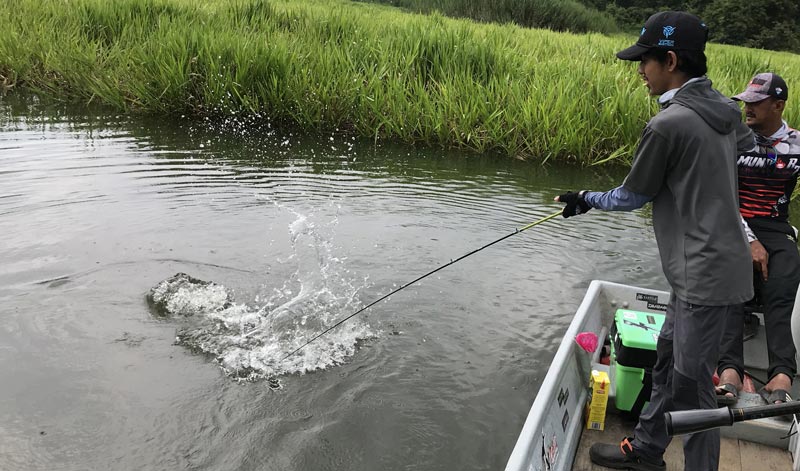 The 3 days of fishing were not easy but it was certainly fun and memorable. It was great to finally be out enjoying the great outdoors after months of staying inside. Catching fish is fun but the pandemic reminded us that fishing is not just about catching fish but instead it’s all about the friendship and experience along the way. 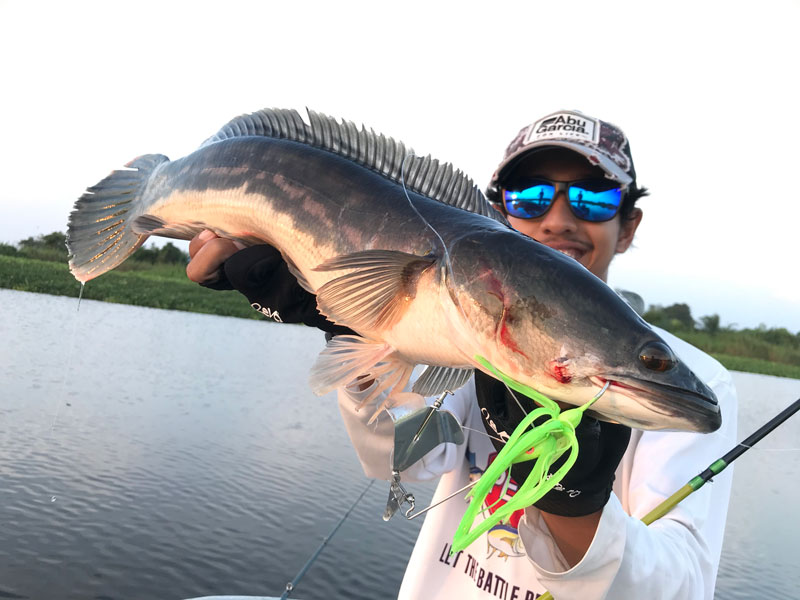 The giant snakehead that took my green buzz bait. The perfect ending of the trip.